The line-up for the last 16 in the Ways Facilities Management World Seniors Snooker Championship is now complete after a busy day of action at the Crucible Theatre.

Rory McLeod was the first player to advance as he defeated Frank Sarsfield, 3-0. The European Tour event winner made breaks of 51 and 73 during his victory and is set to face Joe Johnson next.

In what was the tie of the preliminary round, 2011 winner Darren Morgan was made to sweat as he ousted former finalist Patrick Wallace in the tournament’s first deciding frame finish.

Morgan claimed the opening frame but Wallace responded well by levelling and then taking the third frame on the final black to lead. The Northern Irishman manufactured a 51 break in frame four to put himself on the brink, but Morgan came back to square the match on the final pink.

Now with the momentum, the former world number eight crafted an effort of 51 in the decider which helped him get across the line and earn a date with tournament favourite Michael Holt.

In the afternoon session, Bradford-based Wayne Cooper was cheered on by local support as he impressively racked up runs of 54, 70 and 58 on his way to defeating the reigning Pan-American Seniors champion Ahmed Aly, 3-1. New Yorker Aly created history by becoming the first American to play at Crucible Theatre. Cooper comes up against Ken Doherty in the next round.

The 1995 world professional championship runner-up Nigel Bond is no stranger to winning on the one-table set-up in Sheffield, and he notched up another victory under those conditions as he dispatched Stuart Watson 3-0 with the aid of 61 and 67 breaks. Bond, winner of this title in 2012, goes on to challenge John Parrott.

More history was made during the evening session as former world women’s number one Maria Catalano became the first woman to feature in the final stages of a world seniors tour event.

The five-time world women’s championship finalist gave a fine account of herself – registering a half-century break in the iconic arena – but it was Egypt’s Wael Talaat who was celebrating after a 3-0 win.

The African Seniors champion set his stall out early on with breaks of 40 and 81 in the first frame. Talaat’s prize is an encounter with three-time champion Jimmy White on Friday night.

Three-time London champion and Super Seniors event winner Gary Filtness was the final cueist to book a berth in the last 16 as he caused the upset of the round with a 3-1 success over current main tour professional Michael Judge.

Former UK Seniors champion Judge went 1-0 ahead but Filtness made a 67 break in frame two whilst levelling, before controlling the remainder of the match to record a memorable victory. He’ll look to further his run against current UK Seniors champion Peter Lines in the next round.

Friday sees the start of the last 16 where the seeded players enter the fray. Live coverage can be found on BBC digital channels and Matchroom.Live. 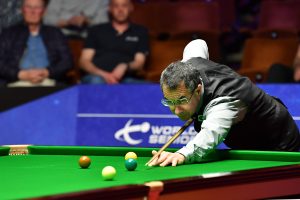